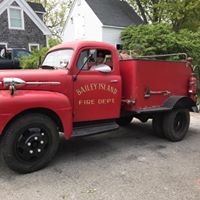 ​In November of 1934 a fire destroyed a small building used as an office during the rebuilding of the Orr's-Great Island Bridge. Residents formed a bucket brigade and held the flames in check until the Brunswick Fire Department could arrive. Shortly after this incident, Capt. Charles Morrill saw the need for more effective firefighting equipment on Orr's Island. He not only raised funds and helped assemble the first equipment, but he inspired the volunteers (mostly lobstermen and fishermen) to learn basic firefighting methods.
A barn on Little Island Road belonging to Brice Roberts was purchased and remodeled to hold equipment on the lower floor and an area for meetings on the second. The department took three years, from 1934 to 1937, to become well organized. It was incorporated in 1941 with William Sylvester as the first chief.
​Soon after the departments were formed, sirens were purchased and mounted to the top of each of the fire barns. To report a fire all one had to do was dial "0" and inform the telephone switchboard where the blaze was. Descriptions such as "Aunt Jenny's house" or "Driftwood" were all that were needed for the operators (who were all island girls) to direct the trucks to the scene on either island. As the calls were coming in, the operator would hit a switch mounted to the left of her console to sound a siren in a code. One long blast followed by two short ones would indicate the fire was between Redman's Hall and Princes store, while two long and one short blast meant it was between the Post Office and the Swisher house on Orr's Island.
On Bailey Island, The first vehicle purchased for the department was a 1937 International pickup which carried hose and ladders. A 1946 International pumper was acquired by Phil Johnson, and the department later added a 1953 Fort 750-gallon tank truck, along with the military surplus vehicle.
Written by Gerald York